TEHRAN, April 18, YJC - France has apprehended two suspects in the city of Marseille over allegations of planning an "imminent and violent attack" in the lead-up to the country’s presidential elections, the French interior minister said. 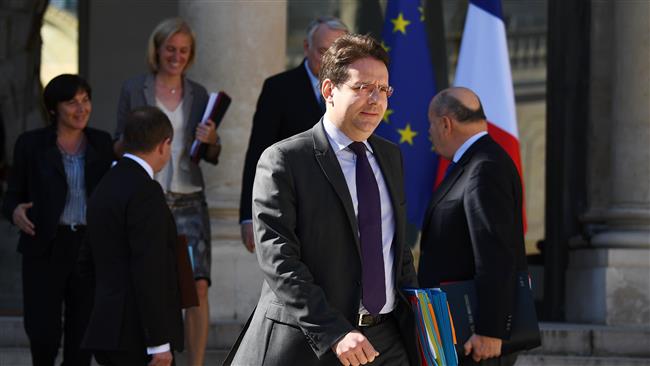 TEHRAN, Young Journalists Club (YJC) - Matthias Fekl made the remarks at a Tuesday press conference amid France’s plans to further beef up security measures to ensure that no terrorist activities occur on the day of its presidential election later this month.
"These two radicalized men, born in 1987 and 1993, of French nationality, intended to commit in the very short-term - by that I mean in the coming days - an attack on French soil," Fekl said.
Police are continuing search operations and have escalated security measures to protect the security of candidates and the election process, the minister added.
Fekl had earlier said that the possibility of security threats is not ruled out, noting that France would enlist over 50,000 police personnel to provide security for the elections.
The minister added that military troopers would also be present in cities on the day of the vote, which is April 23. A run-off is scheduled for May 7 in anticipation of an inconclusive first round.
France has been in a state of emergency since a series of terrorist attacks hit Paris in November 2015, leaving a total of 130 people dead.
Meanwhile, candidates in the election have been making efforts to win the votes of undecided French citizens. Opinion polls show record numbers of voters - one in three - are still undecided.
The race for the presidency features Francois Fillon, Emmanuael Macron, Benoit Hamon, Jean-Luc Melenchon, and Marine Le Pen. Incumbent Francois Hollande is not re-running for office.
Le Pen has caused the most controversy with her extremist, far-right policies.
On Monday, protesters demonstrated in the multi-ethnic Paris suburb of Aubervilliers against a rally planned by Le Pen’s supporters in a nearby concert hall.
Several candidates, including Le Pen, have adopted eurosceptic tendencies in their campaigns. So has self-styled Melenchon.
A leftist firebrand, Melenchon drew tens of thousands of supporters chanting "Resistance” at a rally in the southwestern city of Toulouse on Sunday. The 65-year-old delivered an ode to freedom and international solidarity interspersed with swipes at his rivals, particularly conservative Fillon, who is a former prime minister.
Le Pen from the National Front is leading the polls. She proposes France’s exit from the European Union and voices concerns about security and immigration.
She is followed closely by Macron, whose newly-founded En Marche (Forward) Party is described by its president as neither "the right nor the left.”
Macron, who had several posts in Hollande’s government, pursues the pro-European policies of outgoing President Hollande.