TEHRAN, April 18, YJC - At least 26 people died Tuesday when the bus they were traveling in apparently lost its brakes and plunged into a deep ravine in a northern Philippine mountain town, in one of the country's deadliest road accidents in years, officials said. 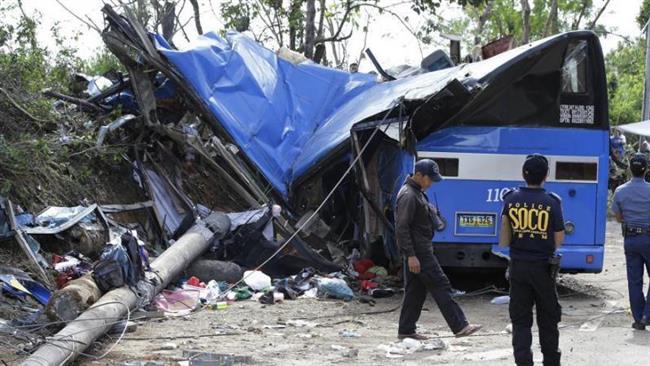 TEHRAN, Young Journalists Club (YJC) - The rest of the more than 50 passengers were retrieved by rescuers who struggled with ropes to descend down the 24-meter-deep (80-foot-deep) ravine to reach the wreckage in Nueva Ecija province's Carranglan town, said disaster-response officer Mark Raymond Cano.
Many of the passengers had serious injuries and were taken to hospitals, with parents being separated from their children in the confusion, officials said.
TV footage showed a line of rescuers and villagers, some holding on to a rope to climb up on a grassy slope with a victim on a stretcher. A throng of villagers waited in a clearing above them to help pull the victim to safety.
The spot along the downhill road beside the ravine is accident-prone. Tuesday's accident was the sixth in the area in recent years, a local village official told DZMM radio.
The impact from the plunge ripped the bus, which could no longer be distinguished at the bottom of the ravine, said Nueva Ecija's police chief, Antonio Yarra. He said investigators could not yet talk to the still-stunned injured survivors to get more details on the accident.
Poorly maintained passenger buses, inadequate road safety features and weak enforcement of local transport laws have been blamed for many vehicular accidents in the Philippines, Presstv reported.
In February, a sightseeing bus carrying college students on a camping trip lost its brakes as it sped down a steep downhill road before smashing into a concrete electrical post in Tanay town in Rizal province east of Manila, killing 15 people.
Share to
Related News
In pictures: ISIS takes control of its first city in the Philippines
Tags
philipines ، bus fall ، ravine
Your Comment