TEHRAN, April 19, YJC - Millions of Indonesians have been going to the polls in the capital Jakarta to pick a governor in a runoff between a Muslim candidate and the incumbent Christian governor, who is being prosecuted for allegations of blasphemy. 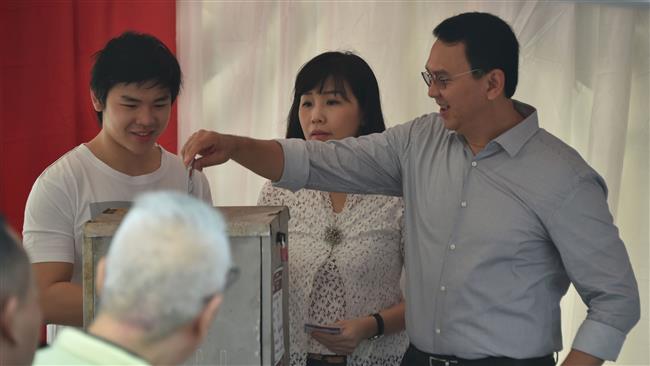 Jakarta’s 7.1 million eligible voters are casting their ballots in more than 13,000 polling stations, which are being secured by thousands of police forces.

Jakarta’s Christian Governor Basuki Purnama Tjahaja, known as Ahok, who is running for another term, is facing blasphemy charges for having recited a verse from the Quran to accuse his opponents of using the holy book to turn voters against him in November 2016.

The move angered Muslims and brought hundreds of thousands of protesters to the streets of Jakarta repeated times. Purnama has denied an intention to insult Muslims.

He came in first with almost 43 percent of the vote in the first round of the election on February 15, just ahead of former Education and Culture Minister Anies Baswedan, who, like 85 percent of Jakarta’s residents, is a Muslim. But the incumbent did not secure enough votes for an outright win.

According to polls, the runoff, too, is expected to be a tight race.

Purnama, who is backed by President Joko Widodo’s ruling party, cast his vote with his family in North Jakarta. There, he said, "The military and the police have guaranteed safety, so don’t be afraid.”

Police had said it would deploy 66,000 personnel in the city.

A Muslim coalition group also said it would be deploying monitors at each polling station across Jakarta.

Tensions are high in the capital of the world’s largest Muslim-populated country, with both sides raising concerns about voter fraud.

Meanwhile, prosecutors will on Thursday make their sentencing demand in Purnama’s trial for blasphemy, which is considered a criminal offense in the country.

If convicted, he would face five years in prison.