TEHRAN, April 19, YJC - Iraqi government forces have reportedly killed the deputy ringleader of the Takfiri Daesh terrorist group in western Mosul as they are engaged in joint operations with volunteer fighters from the Popular Mobilization Units to drive the extremists out of their last urban stronghold in the country. 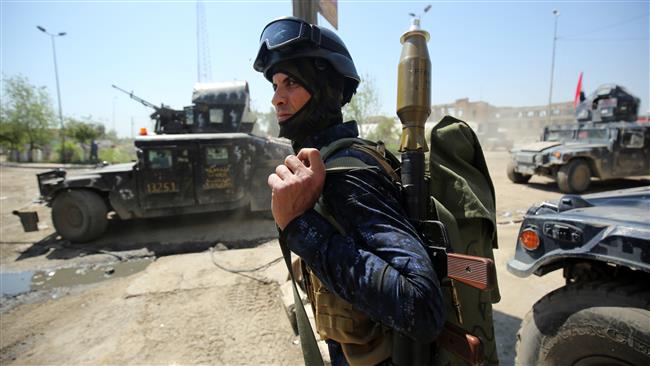 TEHRAN, Young Journalists Club (YJC) - Federal Police Forces Commander Lieutenant General Raed Shaker Jawdat said Abu Abdulrahman, identified as the second-in-command of Daesh and a very close aide to its purported leader Ibrahim al-Samarrai aka Abu Bakr al-Baghdadi, was killed on Wednesday after Iraqi troops lobbed a barrage of missiles at a militant position in the Zanjili neighborhood of western Mosul, Arabic-language Shafaaq news agency reported.
Jawdat added that his forces also launched a number of rockets at predetermined targets near Omar al-Aswad Mosque in the al-Farouq district of the Old City of Mosul, killing a high-ranking Daesh militant figure and four other Takfiri terrorists. The commander was later identified as Abu Walid al-Tunisi.
Moreover, Iraqi police forces fired several artillery rounds into western Mosul's Ras al-Jadah neighborhood, killing Abu Maria al-Roumi, a Daesh commander of Russian origin.
The self-proclaimed Daesh director of tribal affairs, Abu Abdullah al-Shabaki, was also reportedly killed in a US-led airstrike in Zanjili neighborhood.
The United Nations says nearly half a million civilians had fled fighting since the offensive to retake Mosul from Daesh terrorists started on October 17, 2016.
The UN Office for the Coordination of Humanitarian Affairs said on Monday that 493,000 people had been displaced from the city, located some 400 kilometers north of the capital Baghdad.
As many as 500,000 civilians are still trapped in Daesh-controlled neighborhoods of western Mosul, Presstv reported.
Iraqi army soldiers and pro-government fighters from the Popular Mobilization Units, commonly known by the Arabic name Hashd al-Sha’abi, have made sweeping gains against the Takfiri elements since launching the operation to retake Mosul.
The Iraqi forces took control of eastern Mosul in January after 100 days of fighting, and launched the battle in the west on February 19.