Iranian movie to be screened in US festival

TEHRAN, April 20, YJC - An Iranian movie named (Khaste Nabashid) ‘Don’t be Tired’ is to be screened in Earth Day Film Festival in US. 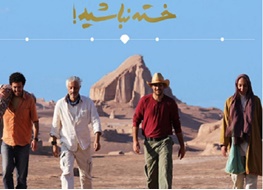 TEHRAN, Young Journalists Club (YJC) - The movie directed by Afshin Hashemi and Mohsen Qaraie is to be showcased in the competition line-up of the 3rd edition off Earth Day International Film Festival in California.
The festival is focusing on films with themes of environment, the earth and renewable energy.
The film narrates the story of a couple visiting Iran but they have certain disagreements.
The festival opened on April 19 closes on April 21.