TEHRAN, April 21, YJC - The Iranian Interior Ministry has announced the final list of eligible candidates for the upcoming presidential vote. 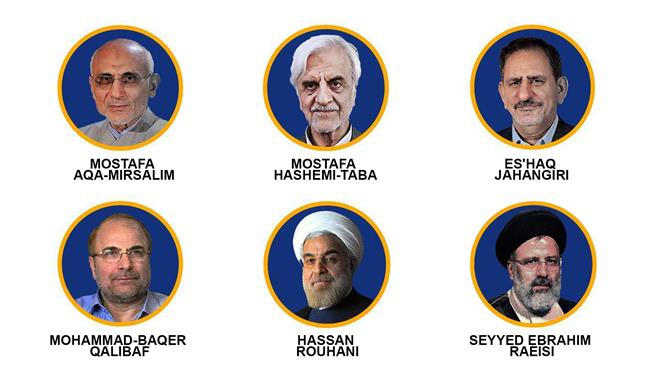 TEHRAN, Young Journalists Club (YJC) - The Iranian Interior Ministry has released the final list of candidates qualified to run in the forthcoming presidential election.
Iran’s Interior Ministry on Thursday night gave the following list of eligible candidates (in alphabetical order) vetted by the Guardian Council.
•    Mostafa Aqa-Mirsalim
•    Mostafa Hashemi-Taba
•    Es'haq Jahangiri
•    Mohammad-Baqer Qalibaf
•    Seyyed Ebrahim Raeisi
•    Hassan Rouhani
The vetting body was examining the qualifications of more than 1,600 candidates who registered to run for president for days.
"We held the final session on examining the qualifications of the presidential election nominees today and fortunately reached a conclusion after five days of numerous sessions,” the council's spokesman, Abbas-Ali Kadkhodaei, said before releasing the final list.
Here is a brief summary of the candidates’ backgrounds:
Aqa-Mirsalim is a member of the Expediency Council. He used to be a senior aide to former President Ayatollah Seyyed Ali Khamenei, and an ex-minister of culture and Islamic guidance, and a former caretaker of the Presidential Office.
Hashemi-Taba was a vice president under former Presidents Ayatollah Akbar Hashemi Rafsanjani and Mohammad Khatami, a former minister of industries, and the former head of the Sports Organization.
Jahangiri, who currently serves as the first vice president, used to be the minister of mines and metals under Khatami, the governor of Isfahan, and a parliamentarian.
Qalibaf, the mayor of Tehran, was a former commander of Iran’s Islamic Revolution Guards Corps’ Air Force, an ex-chief of the national police, and a former commander of Iran’s Khatam al-Anbya Air Defense Base (formerly known as Khatam-al Anbiya Construction Headquarters).
Raeisi is the chief custodian of Astan Quds Razavi, the organization managing the affairs of the Holy Shrine of Imam Reza (PBUH), the eighth Shia Imam, in the city of Mashhad.
Besides performing in other positions, he used to function as the attorney general of Iran’s Administrative Court of Justice.
Rouhani, the incumbent Iranian president, is a member of the Expediency Council and the Assembly of Experts, which appoints the country’s leader. The former posts he used to fill include membership of Majlis (Iranian Parliament) and headship of Iran’s Supreme National Security Council.
The qualified candidates can now start election campaigning until 8 a.m. May 18, the Interior Ministry said in a statement.
Disqualified among the high-profile aspirants were former two-time President Mahmoud Ahmadinejad and his former aide Hamid Baqaei.
Earlier this month, the Iranian Judiciary spokesman said lawsuits filed against Ahmadinejad and Baqaei with regard to administrative violations were open and no final verdicts had been still given on them.
Speaking to reporters on April 16, Gholam Hossein Mohseni-Ejei said the lawsuits were filed against Ahmadinejad in the capacity of president and have not yet led to the delivery of a verdict.
A number of lawsuits have been filed with Iran's judicial officials after Ahmadinejad’s term in office concluded among which cases of malfeasance are more prominent.
Out of major cases filed against the former president are three complaints by the Iranian Parliament’s Article 90 Commission.
Iran will simultaneously hold the 12th presidential election and the 5th City and Village Councils Elections on May 19.
Observers predict a high turnout in the election in which voters will pick the next president for a four-year term.
The five-day registration process for the presidential election ended on Saturday and the Guardian Council started vetting presidential election hopefuls the following day.
Earlier this week, the commander of the Special Units of the Iranian Police Force said that 20,000 police officers would be deployed across the country to ensure security for the votes.