Iran delivers counterblast to US rants at UN

TEHRAN, April 21, YJC - Iran counters US efforts to force the United Nations Security Council (UNSC) to turn its attention away from Israel, and instead target the Islamic Republic. 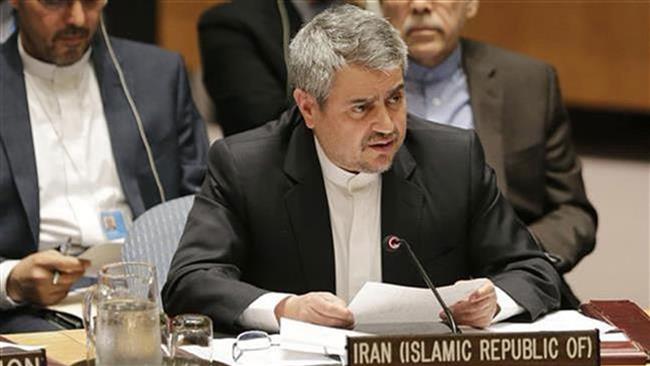 TEHRAN, Young Journalists Club (YJC) - Iran’s UN Ambassador Gholam-Ali Khoshroo made the remarks on Thursday, addressing a UNSC session scheduled to examine the situation in the Middle East and Palestine in specific.
He considered "the apartheid Israeli regime’s” illegal occupation and aggression to be the root of all the challenges, which has faced the Middle East over the past decades.
"By upbraiding all but the occupier, however, the US is trying to sweep the problem under the carpet instead of solving it,” the envoy asserted.
Since 1948, he said, Israel has invaded regional countries for at least 14 times, and has violated at least 86 UNSC resolutions condemning its recurrent acts of aggression and occupation.
The regime, though, has invariably gone unpunished, Khoshroo asserted. He also said Washington and Tel Aviv were indifferent towards the UN reports on the latter’s inhumane policies and were trying to force those writing the reports to resign and for the reports themselves to be withdrawn.
Khoshrou stated that the Israeli regime was the only obstacle to the creation of a Middle East free of weapons of mass destruction as it has refused to join either the nuclear Non-Proliferation Treaty or the Chemical Weapons Convention.
The recent accusations flying against the country’s role in the region were propaganda rooted in psychological reaction and planning by Israel and some regional countries, which had helped the former Iraqi dictator during his 1980-88 war on Iran, the Iranian envoy added.
Nikki Haley, the US ambassador to the UN (seen below), had addressed the Security Council, complaining that its monthly sessions on the Middle East had turned into "Israel-bashing sessions," while they had to focus instead on Iran.
The meetings traditionally address the situation in the besieged Gaza Strip, as well as the Tel Aviv-occupied territories of the West Bank and East Jerusalem al-Quds, where Palestinians either face regular deadly Israeli aggression or expansionist settlement activities by the regime.
Haley said the meetings should rather give primary attention to the "illegal and dangerous behavior" by Iran and the Lebanese resistance movement of Hezbollah in the region.
"Iran is using Hezbollah to advance its regional aspirations. They are working together to expand extremist ideologies in the Middle East," she said. "That is a threat that should be dominating our discussion at the Security Council."
The Islamic Republic has steadfastly voiced support for the Lebanese resistance group, which has fought off deadly Israeli wars on Lebanon in 2000 and 2006, and is currently assisting Syria battle terrorism, while also trying to keep the plight off the Lebanese territory.
It was the US' 2003 actions in the Middle East that eventually created Daesh, Khoshrou said.
The invasion of Iraq was followed by immeasurable chaos and sectarian strife in the Arab country. The Takfiri terror group used the ensuing unrest and instability to plant roots and start its campaign of bloodshed and destruction against the region in 2014.
"Interestingly enough, the very parties that destabilized the region and helped create terror groups now accuse Iran, which has invested the most effort fighting and harnessing the international terror network,” the official said.
Tehran has been lending military advisory support to Damascus and Baghdad in their counterterrorism struggle.
US Syria attack
Over 80 people died in an April 4 purported gas attack in northwestern Syrian town of Khan Shaykhun. Washington later used the attack, which it blamed on Damascus, as a pretext to stage a missile strike against western Syria.
The Khan Shaykhun tragedy came about while Syria had already been disarmed of chemical weapons, Khoshrou said. The UN had verified the disarmament while Daesh, and al-Nusra Front -- al-Qaeda’s Syria branch, which has renamed itself -- were not disarmed of such weapons.
"The US military measure was taken in the absence of either an independent investigation or a probe overseen by the UN,” he said.
He billed the missile attack as a clear example of aggression against a UN member, and flagrant contravention of the UN Charter and international law. "In fact, this measure sends a clear message to terrorists that they can repeat their crimes such as the one they perpetrated on April 4 and be rewarded by the United States,” the official asserted.
The US strike resulted in another "crime that claimed the lives of at least 126 people, mostly children, on April 15," he said.
A bomber blew up an explosives-laden car on the day, ripping through several buses carrying evacuees from Kefraya and Foua, two Shia-dominated villages in northeastern Syria.
Share to
Tags
Iran ، UN ، US
Your Comment