Trump's claim that Korea was part of China sparks outrage

TEHRAN, April 22, YJC -US President Donald Trump has sparked outrage in South Korea with remarks that the Korean peninsula "used to be part of China." 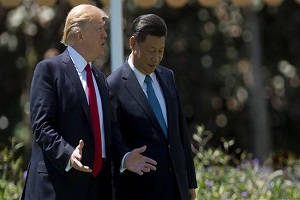 TEHRAN, Young Journalists Club (YJC)- Trump made the remarks during an interview with the Wall Street Journal on April 12 following his summit with Chinese President Xi Jinping at his Mar-a-Lago retreat in Palm Beach, Florida.
Trump’s claim was largely buried in news coverage of the president’s wide-ranging interview with the Journal, during which he made numerous flip-flops on several policy areas.
However, the comments went viral in South Korea after an article was published by Quartz on Tuesday.
In the interview, Trump said Xi told him during their summit that "Korea actually used to be a part of China.”
The comments sparked an angry reaction from Seoul and became an issue in South Korea’s presidential race, prompting the foreign ministry to seek to verify what Xi actually said.
"It’s a clear fact acknowledged by the international community that, for thousands of years in history, Korea has never been part of China,” foreign ministry spokesman Cho June-hyuck said at a briefing in Seoul on Thursday.
The exact details of what Xi said and whether Trump accurately represented him are not known. Chinese foreign ministry spokesman Lu Kang declined to confirm the details of Xi's wording, saying that, "The Korean people should not be worried about it."
South Korean daily newspaper JoongAng Ilbo said South Koreans had been "dumbfounded" by the Chinese leader. "If Trump really conveyed Xi's words correctly, it is nothing but a grave challenge to the identity of the Korean people," it said.
Relations between China and South Korea are "at their lowest for years," said Bong Young-Shik, analyst at the Yonsei Institute for North Korean Studies.
Beijing and Seoul have clashed over the deployment of the US missile system THAAD to the South to purportedly repel threats from the North.
South Korean newspaper Chosun criticized both leaders, rebuking Trump for a lack of awareness of diplomatic sensitivities and Xi for his "expansionist view."
"The fact that Trump publicly disclosed such a remark (by Xi) demonstrates that he is completely ignorant about the history of the Korean peninsula," it said in an editorial Friday.
Source:Press TV
Share to
Related News
U.S. states realign in legal battle over Trump's travel ban
Vomitoxin makes nasty appearance for U.S. farm sector
Trump has 'dangerous mental illness,’ some experts say
Washington threatens funding cut to California, other 'sanctuary' areas
Trump admin. wants to resume munitions sale to Saudis: Officials
Tags
trump ، north korea ، china
Your Comment