TEHRAN, April 22, YJC -Tens of thousands of anti-fascist protesters are expected to rally amid heavy police presence against an event to be held by Germany’s right-wing political party over the weekend in the western city of Cologne. 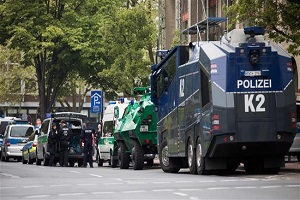 TEHRAN, Young Journalists Club (YJC)- Some 50,000 protestors are estimated to descend on the city center with the aim of blocking the entrance to the hotel, where anti-Islam and anti refugee Alternative for Germany (AfD) is set to hold its convention.
According to German media, around 4,000 police forces armed with tear gas and water cannons have been tasked with ensuring security at the site, where a counter-rally is also expected to be held by far-right activists.
A no-fly zone has also been imposed over Cologne.
More than 70 different social groups and left-leaning organizations expressed readiness to attend the protest rallies under the slogan "solidarity instead of agitation.”
Police set up barricades and closed off parts of central Cologne to prevent any possible clashes.
The AfD campaign gained momentum last year amid rising xenophobic sentiments fueled by the refugee influx into Germany, which far-right activists blame on German Chancellor Angela Merkel’s open-door policy vis-a-vis asylum seekers.
Supporters of the anti-Islam Pegida group and anti-fascist protesters have repeatedly clashed, while there have been more than 1,000 attacks on refugee accommodation as hate crimes rise in the country.
With a population of over 80 million people, the west European county registered some 1.1 million refugees between January and December 2015 and expects another 2.5 million to arrive by the end of 2020.
Europe is facing its worst refugee crisis since the end of World War II as vast numbers of asylum seekers fleeing conflict-ridden zones in Africa and the Middle East try to gain access to the continent.
The refugee crisis in Europe and a series of Daesh related terrorist attacks across the globe have led to the rise of Islamophobia among racists and xenophobes in the West.
Some 4,000 Muslims make up nearly five percent of the total population in Germany.
Many blame the support by some Western countries for militants operating in the Middle East as the main reason behind the departure of refugees from their home countries.
Source:Press TV
Share to
Related News
1,000s rally against PEGIDA on its anniversary
Turkey says European Court of Human rights lacks jurisdiction to rule on referendum
UK early elections ‘dangerous’: Tony Blair
French police, protesters clash in anti-Le Pan rally in Marseille
Tags
GERMANY ، rally ، party
Your Comment