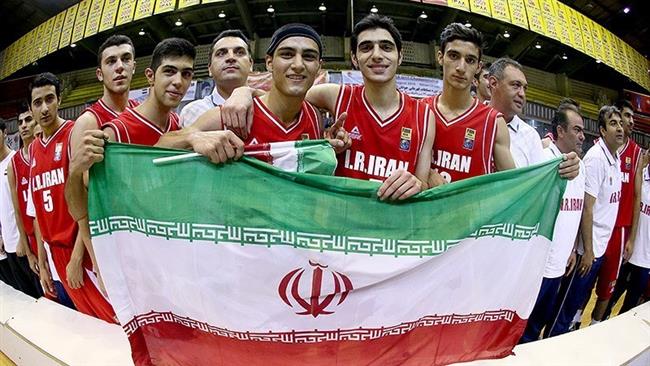 The Iranian basketball players made a sound start and tallied enough points to claim the first quarter 27-20.
The Iranians kept the dominance in the second quarter, scoring points to surge ahead. They eventually registered a sixteen-point lead and clinched the quarter 26-10.
The Iranian side showed no sign of surrender as it entered the third quarter. The Persians mounted a string of attacks, and put the opposite side under a relentless spell of pressure to accumulate all the points. They ultimately closed the quarter at 15-11.
In the final quarter, the Iranian team maintained superiority and could take the quarter by 26 points to 12 at last.
The Iranian outfit is scheduled to face Lebanon on Sunday evening.
The 7th edition of WABA Junior Championship started in Tehran, the Islamic Republic of Iran, on April 19, and will run through April 23, 2017.
The tournament has brought together national junior basketball teams from Iran, Iraq, Jordan, Lebanon and Syria.
Source: Press TV
Share to
Related News
Iran women’s 3x3 basketball team off to Philippines for 2018 World Cup
Iranian Khaki takes helm of Iraq wheelchair basketball team head coach
Iran most likely to succeed in basketball world championship
Tags
Iran ، Jordan ، WABA ، basketball
Your Comment