TEHRAN, April 25, YJC -A Russian lawmaker has reacted sharply to remarks by British Defense Secretary Michael Fallon about the UK’s readiness to launch a preemptive nuclear strike against “enemies,” stressing that the comments deserve a “tough response.” 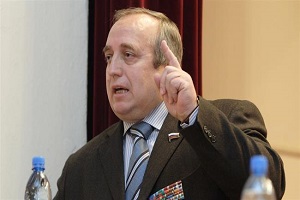 TEHRAN, Young Journalists Club (YJC) - Speaking to BBC Radio 4’s Today program on Monday, Fallon said the government of Prime Minister Theresa May could not rule out using nuclear weapons as a first preemptive strike "in the most extreme circumstances.”
Asked in what circumstances, he replied, "They are better not specified or described, which would only give comfort to our enemies.”
Reacting to Fallon’s statement, Frants Klintsevich, first deputy chairman of the defense committee in Russia’s upper house of parliament, the Federation Council, said Monday that the remark "deserves a tough answer, and I’m not afraid to overdo it.”
Fallon’s threat should be viewed as part of a "psychological warfare,” said Klintsevich.
"Otherwise, this looks absolutely bad as a natural question arises - who is it that the UK is ready to preemptively use nuclear weapons against?” Klintsevich’s press service quoted him as saying.
The Russian MP further said "if Britain attacks a nuclear power, it will be "literally wiped off the earth by a retaliatory strike given its not-too-vast territory.”
However, if a non-nuclear state is implied, the UK seems to be open to repeating what the US did to the Japanese cities of Hiroshima and Nagasaki in 1945, he added.
Towards the end of World War II, the US military dropped nuclear bombs on the two cities with the consent of the United Kingdom, killing at least 129,000 people. The two bombings are the only use of nuclear weapons for warfare in history.
"Those times are over, as well as the times of the former mightiness of the British Empire,” the Russian MP said. "So cut the coat according to the cloth, as we say.”
Fallon’s comments came after British Labour Party Leader Jeremy Corbyn suggested that he was prepared to scrap the Trident nuclear program entirely, adding that a Labour government would launch an immediate defense policy review.
Facing an uproar over his stance, Corbyn was later forced to issue a statement, saying that his party still supported Trident.
Source:Press TV
Share to
Related News
UK won’t pay €100 billion to EU over Brexit: Davis
Russia, Japan call for resumption of talks on Korean settlement
China, Russia slam installment of US missile system in South Korea
May ready to launch nuclear weapons as a first strike: Fallon
Corbyn might suspend UK airstrikes in Syria if elected prime minister
UK early elections ‘dangerous’: Tony Blair
Tags
UK ، Russia ، harsh
Your Comment