Cancel meeting with NGOs or we won’t meet: Netanyahu to Gabriel 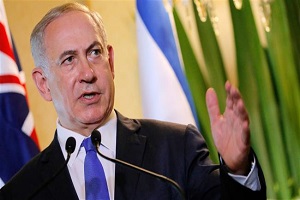 TEHRAN, Young Journalists Club (YJC) - Gabriel traveled to the occupied territories on Monday evening to press for the so-called two-state solution to the decades-long Israeli-Palestinian conflict. He plans to meet with representatives of Breaking the Silence and B’Tselem on Tuesday.
However, a senior Israeli official said on Monday that Netanyahu had given Gabriel an "ultimatum” over his plans, adding the Israeli premier would cancel his meeting with Gabriel if the German official refused to drop his plans to meet with the rights groups.
Reacting to the ultimatum on Tuesday, the German foreign minister said it would be "regrettable” if Netanyahu called off their meeting, arguing it was normal to talk to civil society representatives.
"Imagine if the Israeli Prime Minister ... came to Germany and wanted to meet people critical of the government and we said that is not possible ... That would be unthinkable,” he told Germany’s ZDF television.
Israeli opposition leader Isaac Herzog blasted Netanyahu for issuing the ultimatum and accused him of harming Berlin-Tel Aviv ties.
"Netanyahu’s ultimatum to the German foreign minister is a serious blow to Israel’s foreign relations with the biggest economy in Europe,” he said.
Back in February, Berlin canceled an annual meeting of German and Israeli leaders scheduled for May amid rising frustration with settlement activities in the occupied West Bank.
Additionally in the same month, Israel summoned the Belgian ambassador to Tel Aviv after Belgian Prime Minister Charles Michel met with Breaking the Silence and B’tselem representatives.
More than 230 Israeli settlements have been built since the 1967 occupation of Palestinian lands.
The international community views the Israeli settlements as illegal under the Geneva Conventions, which forbid construction on occupied territory.
Tel Aviv has accelerated its land grab and settlement construction activities in the occupied Palestinian territories after pro-Israel US President Donald Trump took office earlier this year.
The settlement activities are in defiance of United Nations Security Council Resolution 2334. The resolution, which was adopted in December 2016, condemned the settlements as a "flagrant violation of international law."
Earlier this month, Israel approved the construction of 212 new settler units in the East Jerusalem al-Quds neighborhoods of Pisgat Ze'ev and Ramat Shlomo.
Source:Press TV
Share to
Related News
Russia backs Iran’s full membership in SCO
Russia, Iran, Turkey continuing joint work on Syria ceasefire: Lavrov
Turkey says European Court of Human rights lacks jurisdiction to rule on referendum
Tags
cancel ، meeting ، netanyahu
Your Comment