I don’t want to be Israel’s political ‘plaything’: German FM

TEHRAN, April 25, YJC - Germany’s foreign minister says he does not want to be “a plaything” for Israel’s politicking after the regime’s prime minister refused to receive him over the senior diplomat’s meeting with pro-Palestine advocacy groups. 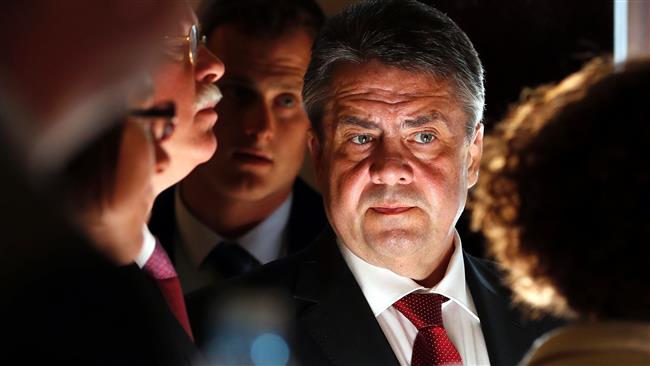 Israeli Premier Benjamin Netanyahu gave the top German diplomat an ultimatum over his planned meetings, saying he would not meet him if Gabriel refused to drop the plans.

Netanyahu said the organizations "slander” Israeli troops "and seek to put our soldiers on trial as war criminals,” and that Tel Aviv would routinely shelve meetings with the officials who would hold talks with the rights bodies.

Gabriel, however, proceeded to attend the meetings in spite of the warning. He later addressed the incident, saying, "I regret it greatly. I was surprised by the cancellation of the visit, apparently because we were planning to do something which is quite usual on such visits, namely to speak also with representatives of the civil society.”

"You can’t get a proper and comprehensive picture in any country on Earth if you only meet in government offices,” added Gabriel.

He also signaled that future visits by German officials could likewise feature similar sessions with rights organizations. "I can’t imagine that we would not do such things in the future just to get government appointments,” Gabriel said.

Both Gabriel and Netanyahu, however, asserted that the incident would not harm bilateral ties.

Following the session with Gabriel, B’Tselem issued a press release and called on the international community to bring the regime in Tel Aviv to justice for its continued occupation of the Palestinian territories.

"There must be a price to pay for continued military control of another people while thumbing one’s nose at basic moral values and international law,” the statement said.

In similar comments, B’Tselem director Hagai el-Ad also called for an end to the Israeli occupation in an interview with Israel’s Channel 2.

"Our message is the same message we delivered at the UN Security Council [in October 2016], the message we say to the Israeli public and won’t stop saying — the occupation must end and you can’t hide it, not from Israelis and not from the world,” he said. "That’s the truth and those are the facts and it’s not clear what the prime minister is so afraid of.”

In October 2016, B’Tselem infuriated Netanyahu and other right-wing politicians in Israel by taking the podium at the UN to speak against the regime’s illegal settlement activities in Palestinian lands, vowing to keep up its anti-occupation campaign despite the threats it receives from Tel Aviv.

Israel has been occupying the territories of West Bank and East Jerusalem al-Quds since 1967.

It has been dotting the areas with settlements ever since in what has been regularly denounced as an insidious trend towards annexation of the lands.