TEHRAN, April 26, YJC - The Donald Trump administration is scheduled to hold rare briefings for the full US Congress on the president’s policy toward North Korea amid rising tensions between the two countries. 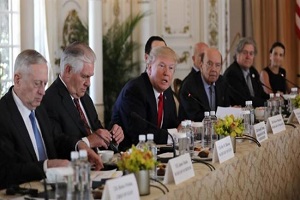 TEHRAN, Young Journalists Club (YJC) -All 100 members of the Senate along with Secretary of State Rex Tillerson, Secretary of Defense James Mattis, Director of National Intelligence Dan Coats and General Joseph Dunford, chairman of the Joint Chiefs of Staff, will attend the session on Wednesday.
The administration officials, who typically go to the Capitol building to brief lawmakers on national security issues, will be meeting the entire Senate at the White House before the same four officials go to Capitol Hill to brief the entire House at 5 pm EDT.
"I hope and expect that it is worth the time of the trip and that we'll hear things we don't know, and that we'll come out of it better informed. We'll see," said Senator Chris Coons, a Democratic member of the Senate Foreign Relations Committee.
Lawmakers, including some Republicans, have complained of a lack of communication between the White House and Congress since Trump took office in January, partly because his administration has been slow to fill key posts and he himself has been slow to develop policy positions.
The meeting will be held one day after North Korea marked the 85th anniversary of the founding of its army on Tuesday. Pyongyang had previously conducted nuclear or missile tests to mark the day, but this year it carried out a major live-fire exercise.
White House spokesman Sean Spicer told reporters that Gen. Dunford, during the meeting, "will lay out some of the military actions" as well as the Pentagon's view of the situation while Tillerson and the other officials would brief the lawmakers on the US posture and activities.
Meanwhile, the US military began transporting parts of the controversial Terminal High Altitude Area Defense (THAAD) missile system to a planned deployment site in South Korea.
According to South Korea’s Yonhap news agency, six trailer trucks, carrying the radar and other equipment for the THAAD missile battery, arrived at the deployment site, located on what had been a golf course in the southeastern region of Seongju in early hours of Wednesday.
The Trump administration has several times warned that all options, including a military strike, were being considered to halt Pyongyang’s missile and nuclear activities.
China has opposed any move that runs counter to the UN Security Council resolutions already in place against North Korea.
North Korea has threatened the US with "all-out war” and announced that Pyongyang would continue to test missiles on a weekly basis.
Pyongyang says its missile and nuclear programs act as deterrence against a possible invasion by its adversaries, particularly the US.
Source:Press TV
Share to
Related News
Former ambassadors urge Congress not to cut UN funding
US judge blocks Trump’s executive order targeting 'sanctuary cities'
Former envoys urge US not to cut UN funding
Trump not to dare start war on North Korea: Russian analyst
US judge blocks Trump’s executive order targeting 'sanctuary cities'
Tags
trump ، congress ، north korea
Your Comment