TEHRAN, April 26, YJC - US president Donald Trump has accused his opponents of “judge shopping” after a federal court blocked another executive order on immigration. 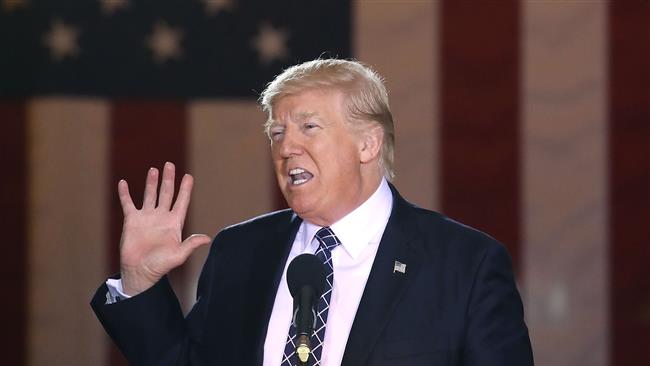 TEHRAN, Young Journalists Club (YJC) - Trump took to his Twitter account on Wednesday to blast the Court of Appeals for the Ninth Circuit, which oversees the district courts that have blocked his travel ban against Muslims as well as his pledge to punish states that shelter illegal immigrants.
"Out of our very big country, with many choices, does everyone notice that both the ‘ban’ case and now the ‘sanctuary’ case is brought in the Ninth Circuit, which has a terrible record of being overturned (close to 80%).” the Republican president said in multiple tweets. "They used to call this ‘judge shopping!’ Messy system.”
Shortly after being inaugurated in late January, Trump launched a clampdown on immigration by imposing an entry ban against citizens of several Muslim countries. He also signed a directive that threatened to withdraw funding from so-called "sanctuary states” that did nothing to stop immigrants crossing the southern borders.
The Muslim ban and its revised version were blocked by district judges in Washington and Hawaii in February and March. The rulings infuriated Trump, who pledged to take the matter to the Supreme Court.
The sanctuary states decree met the same fate and was blocked by District Judge William Orrick III in San Francisco, California, on Tuesday.
Orrick argued that there was "no meaningful relationship” between immigration enforcement and federal funding and Trump did not have the right to punish a state for choosing a strategy that he did not approve of.
"The constitution vests the spending powers in Congress, not the president, so the order cannot constitutionally place new conditions on federal funds,” the judge said.
The ruling came amid reports that Trump had postponed his planned wall on the border with Mexico, walking back another one of his main campaign pledges to curb immigration.
The Trump White House had asked Congress for $1.4 billion as a down payment for the roughly $21 billion project. However, he dropped the request because it risked derailing negotiations with Democrats for a spending extension to prevent a government shutdown.
Democrats say they would only agree with the extension if Trump withdraws the wall funding. The current spending bill ends on Friday.