TEHRAN, April 28, YJC - US President Donald Trump has warned that a “major conflict” with North Korea is “absolutely” possible in the ongoing standoff over its nuclear and missile programs. 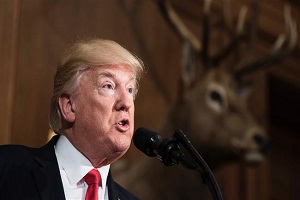 TEHRAN, Young Journalists Club (YJC) -"There is a chance that we could end up having a major, major conflict with North Korea. Absolutely," Trump told Reuters on Saturday ahead of his 100th day in office.
However, the president said he would prefer to avoid a military confrontation and resolve the issue peacefully.
"We’d love to solve things diplomatically but it’s very difficult,” he said.
Trump’s warning capped a week of threats by administration officials as Pyongyang has signaled it intended to carry out its sixth nuclear test.
In testimony before a congressional panel on Wednesday, Admiral Harry Harris, the head of the US Pacific Command, said the standoff with North Korea was the worst he had seen.
The commander warned that the pace of the North’s missile tests indicated that Pyongyang would at some point be able to launch a nuclear ballistic missile at the US unless stopped by force.
Also on Wednesday, Trump invited the entire US Senate to the White House for a rare briefing on the latest developments with regards to North Korea.
Secretary of State Rex Tillerson, Secretary of Defense James Mattis, Chairman of the Joint Chiefs General Joseph Dunford and Director of National Intelligence Dan Coats briefed the senators on the situation.
Some senators left the session with a sense that the administration is getting ready for a military action against the reclusive country.
"The military is obviously planning for a number of options, as they should -- minimal military action to more significant action,” said Senator Ted Cruz of Texas. "If there's a clear and imminent threat to the US, our military needs to be prepared to act.”
The administration, meanwhile, is putting increased pressure on China to contain its neighbor's nuclear ambitions.
In the interview with Reuters, Trump praised Chinese President Xi Jinping, whom he had previously criticized for not doing enough, for "trying very hard” to resolve the standoff.
"He certainly doesn't want to see turmoil and death," Trump said. "I know he would like to be able to do something, perhaps it's possible that he can't."
Tillerson said Thursday that Beijing threatened Pyongyang with sanctions if it carried out another nuclear test.
"We know that China is in communications with the regime in Pyongyang,” he told Fox News. "They confirmed to us that they had requested the regime conduct no further nuclear test.”
Tillerson will press the United Nations Security Council on Friday to impose new sanctions on North Korea and further isolate the country.
The Trump administration has said all options are on the table, and has sent an aircraft carrier and a nuclear-powered submarine to the region in a show of force.
The US military has also begun transporting parts of the controversial THAAD anti-missile system to a planned deployment site in South Korea.
Pyongyang has threatened the US with a nuclear attack in case of a direct military action, and has indicated that weapons tests would continue more frequently.
Source:Press TV
Share to
Related News
Cruz denies reports about replacing Sessions as new US attorney general
North Korea 'poses a grave threat' to US, allies: McMaster
US envoy to UN calls for pressure on Russia over Syria
Trump won't immediately terminate NAFTA with Canada, Mexico: White House
Trump weighing military options against North Korea: Ted Cruz
Tags
trump ، north korea ، confilct
Your Comment