TEHRAN, April 28, YJC -Members of the Palestinian resistance movement Islamic Jihad in the besieged Gaza Strip have gone on a mass hunger strike to show support for Palestinian prisoners in Israeli jails who have been refusing to eat for nearly two weeks. 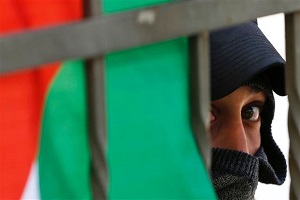 TEHRAN, Young Journalists Club (YJC) - Reports on Thursday said that some 500 leaders and members of the Islamic Jihad movement began a 24-hour hunger strike in support of the prisoners.
Palestinians in the occupied West Bank also announced plans for similar mass hunger strikes while a general walkout was observed as schools, businesses and public transport were all shut down.
In the city of Ramallah, a large number of protesters gathered at a tent set up at the Yasser Arafat Square to march through the streets of the West Bank city to express their solidarity with the inmates.
Clashes also erupted between Israeli forces and protesters supporting hunger strikers in different cities across the West Bank. Protesters were tear gassed in al-Khalil (Hebron) and Eizariya. Groups supporting the prisoners have declared a day of rage on Friday.
Over 1,500 Palestinian prisoners in Israeli jails have joined a hunger strike which began last week to protest against Israeli violations including torture, medical negligence and administrative detention. The action is led by senior Palestinian figure Marwan Barghouti. Reports say Barghouti's health has sharply deteriorated as a result of long periods of hunger strike.
Israeli prisons hold some 7,000 Palestinians, including 300 minors. Some of the inmates are held under Tel Aviv’s policy of administrative detention, which enables confinement without charge.
Palestinian inmates regularly stage hunger strikes in protest at the administrative detention policy and their harsh prison conditions.
Palestinian leaders have strongly censured Israel's refusal to negotiate with the hunger strikers, warning of a new intifada, or uprising, if any of them dies.
Source:Press TV
Share to
Related News
Palestinian hunger strikers urge Pope to speak out against Israel
Thousands rally in West Bank to back Palestinian hunger strikers
World Bank warns of ‘humanitarian crisis’ in Gaza
Masked Israeli settlers attack group of activists, Palestinian shepherds
Israeli forces clash with Palestinian protesters in Bethlehem
Tags
palestin ، support ، prisoners
Your Comment