TEHRAN, April 28, YJC - President Donald Trump has criticized Saudi Arabia for not paying its fair share in return for the US security umbrella. 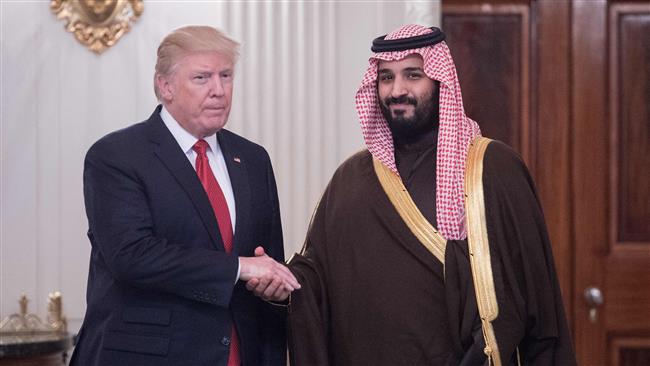 TEHRAN, Young Journalists Club (YJC) - "Frankly, Saudi Arabia has not treated us fairly, because we are losing a tremendous amount of money in defending Saudi Arabia,” Trump said in an interview with Reuters news agency on Wednesday.Trump’s criticism of Saudi Arabia was a return to his 2016 election campaign rhetoric where he questioned the protective nature of US relations with the oil-rich kingdom.
"We take care of Saudi Arabia. Nobody’s going to mess with Saudi Arabia because we’re watching them," Trump said during a rally in Wisconsin a year ago. "They’re not paying us a fair price. We’re losing our shirt.”
The billionaire even suggested then that Washington should consider ditching Riyadh because the US was increasingly lessening its dependence on overseas oil.
However, Trump toned down the rhetoric after he took office in January.
The president received Saudi Arabia’s powerful deputy crown prince Mohammed bin Salman at the White House last month, a meeting that was hailed by a senior Saudi adviser as a "historical turning point” in US-Saudi relations.
The meeting, Trump’s first with a Middle Eastern dignitary as president, appeared to signal agreements on many issues including the view that Iran was a regional security threat.
Saudi Arabia sees in Trump a president who will restore Washington’s role as its main strategic partner, after relations reached a low point under former President Barack Obama over a nuclear agreement with Iran.
Trump said his administration was in talks about possible visits to Saudi Arabia and Israel next month.
Defense Secretary James Mattis met with senior Saudi officials in Riyadh this month for talks aimed at reinvigorating the decades-old alliance, Presstv reported.
The Pentagon chief said it was in the interests of the United States to "see a strong Saudi Arabia.”
US officials have said Washington is considering resuming weapons sales to Saudi Arabia as part of additional military and intelligence assistance to the kingdom’s war in Yemen.
Obama had put the arms sale on hold in December amid international outrage over the high civilian toll in Yemen.

Share to
Related News
Every weapon obtained by YPG threat against Turkey: Cavusoglu
Saudi king congratulates US for attacking Syria with missiles
Tags
Saudi Arabia ، US ، Trump
Your Comment