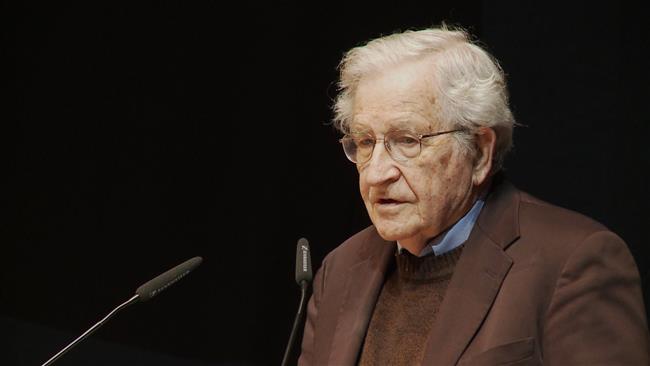 TEHRAN, Young Journalists Club (YJC) -In an interview with Democracy Now!, Chomsky repeated the remarks he made in November last year about Trump’s Republican Party, calling it the most "dangerous organization in human history.”
Chomsky said the Trump administration had shown total disregard for the future of the earth and is determined to dismantling the system in place to tackle climate change.
He said the administration is "systematically” destroying governmental institutions, such as the Environmental Protection Agency and the Department of Energy, for the sake of "profits and power.”
"Has there ever been an organization in human history that is dedicated, with such commitment, to the destruction of organized human life on Earth?” he asked the audience at a Democracy Now! Event this week.
"Not that I’m aware of. Is the Republican organization - I hesitate to call it a party - committed to that? Overwhelmingly. There isn’t even any question about it,” he stated.
Last year Professor Chomsky said the outcome of the November 8 elections "placed total control of the government — executive, Congress, the Supreme Court — in the hands of the Republican Party, which has become the most dangerous organization in world history.”
During the Democracy Now! event, Chomsky said that the Trump administration is isolating the United States as one of the few countries not to be working to tackle climate change.
"So there’s the whole world on one side, literally, at least trying to do something or other, not enough maybe, although some places are going pretty far, like Denmark, couple of others; and on the other side, in splendid isolation, is the country led by the most dangerous organization in human history, which is saying, ‘We’re not part of this.
In fact, we’re going to try to undermine it,’” said the American commentator and writer.
"We’re going to maximize the use of fossil fuels - could carry us past the tipping point.
We’re not going to provide funding for - as committed in Paris, to developing countries that are trying to do something about the climate problems. We’re going to dismantle regulations that retard the impact, the devastating impact, of production of carbon dioxide and, in fact, other dangerous gases - methane, others,” he stated.
Chomsky had predicted the presidency of Trump would be particularly damaging to environment since he does not believe in climate science.
In March, Trump signed an executive order aimed at rolling back most of his predecessor’s climate change policies, promising that the measure would create jobs in the fossil fuel industry.
Trump signed the document titled the "Energy Independence Executive Order” at the headquarters of the Environmental Protection Agency  on April 28, suspending more than half a dozen measures enacted by former President Barack Obama.
In the run-up to the November election, Trump had said that he would pull America out of the UN global climate accord if elected, spelling potential doom for a treaty many scientists view as a last chance to limit global warming.
"We're going to cancel the Paris climate agreement," Trump said at the Williston Basin Petroleum Conference in Bismark, Dakota, last year.
He also promised to roll back environmental policies, actions of the Obama administration and vowed to revive the ailing US oil and coal industries and bolster national security.
The Paris climate agreement, which deals with greenhouse gases emissions mitigation, adaptation and finance starting in the year 2020, was negotiated by representatives of nearly 200 countries in Paris and adopted by consensus on December 12, 2015.
In a previous interview with Democracy Now! Chomsky had called the possibility of a nuclear war and global warming greatest threats to the mankind’s existence.