TEHRAN, April 29, YJC -A planned speech by Israel’s ambassador to Britain at a university in London has been met with protests by anti-Israeli and pro-Palestinian students on the campus. 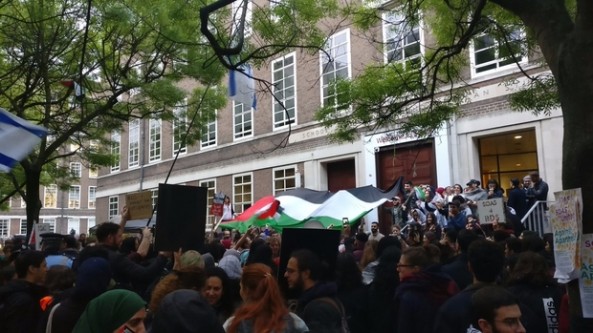 TEHRAN, Young Journalists Club (YJC) - Mark Regev, the Israeli envoy, who is a former aide to Israeli Prime Minister Benjamin Netanyahu, was on Thursday invited to deliver a lecture at the School of Oriental and African Studies

Hundreds of students thronged at the venue to protest, with many carrying the Palestinian flag and the banner reading "Apartheid off campus.”

They expressed their opposition to the decision by the SOAS’s management to allow the Israeli diplomat in the school.

"We are out here today to show Mark Regev and the management at SOAS that students and staff will not tolerate apartheid, and that we stand in solidarity with Palestinians, who have had their lives ruined by

occupation,” said a SOAS student and organizer of the protest.

"I just wanted to protest against Raghev being invited to speak at SOAS. He doesn’t stand for the values that the SOAS believes in and he is someone who supports the Israeli regime, which has consistently denied

"Here the whole campus is up in arms. It is not an academic event. It is a spokesperson for the Israeli government, someone with a very doubtful public profile, who has tried to justify publicly many actions of the

Anti-Israeli sentiments have risen among people across the world — including in the UK — over Tel Aviv’s discriminatory policies in the occupied territories and toward the Gaza Strip.

Over the past years, Israel has launched three wars against Gaza, resulting in the deaths of thousands of Palestinians, including many women and children. The Tel Aviv regime has also had the strip under a

Tel Aviv has also faced repeated condemnations and a recent United Nations Security Council resolution over its settlement activities in the occupied territories.

In 2005, Palestinian and international activists initiated the Boycott, Divestment and Sanctions (BDS) movement to push for "various forms of boycott against Israel until it meets its obligations under international

The BDS movement, which also calls for Israel to end its occupation of Palestine, has gradually gained global support, including among the public in Australia, Britain, Canada, Denmark, Norway, Romania, South

Africa, and the United States.

Two years ago, SOAS students and staff voted for the school to formally endorse an academic boycott of Israeli institutions as part of the BDS movement.