TEHRAN, April 29, YJC -North Korea test-fired a ballistic missile from a location north of the capital Pyongyang, but it exploded shortly after liftoff, the US and South Korean militaries say. 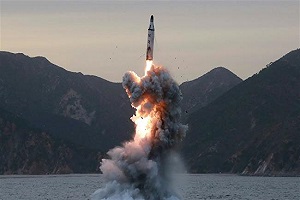 TEHRAN, Young Journalists Club (YJC) -"North Korea fired an unidentified missile from a site in the vicinity of Bukchang in Pyeongannam-do (South Pyeongan province) early this morning," South Korea's Yonhap news agency reported on Saturday, quoting a statement released by South Korea's military.
A US government source told Reuters that based on initial indications, the missile test was unsuccessful. Citing the South Korean military, Yonhap news agency also reported that the missile exploded a few seconds into flight.
Dave Benham, a spokesman for US Pacific Command, also said the missile did not leave North Korean territory after launch, which he said took place at 2033 GMT on Friday.
"The North American Aerospace Defense Command determined the missile launch from North Korea did not pose a threat to North America,” the US commander added.
Saturday's launch was the second failed test-fire of North Korean missiles in two weeks.
North Korea disrespected China: Trump
US President Donald Trump lambasted Pyongyang's latest ballistic missile test, calling it a show of disrespect toward its ally China. "North Korea disrespected the wishes of China & its highly respected president when it launched, though unsuccessfully, a missile today. Bad!" he tweeted.
A US official, speaking on condition of anonymity, also said Washington could speed up its plans for a new raft of sanctions against the North, adding that the Pentagon could also carry out fresh naval exercises and send more ships and aircraft to the region as a show of force.
Meanwhile, Japan's Chief Cabinet Secretary Yoshihide Suga strongly condemned the ballistic missile test as "absolutely unacceptable", saying it was in flagrant violation of the UN resolutions. He added that he was in close contact with Japanese Prime Minister Shinzo Abe, who is currently in Europe.
The reported test-launch comes only a few hours after the United Nations Security Council convened on the situation in the Korean Peninsula, with the US calling for more sanctions on Pyongyang over its nuclear and ballistic programs.
During the meeting, US Secretary of State Rex Tillerson warned that "all options" regarding North Korea "must remain on the table" due to the "threat of a North Korean nuclear attack" on Seoul Korea, Japan or the US mainland.
He further piled pressure on China to employ its "unique" leverage in an attempt to influence its ally.
Tillerson made the remarks hours after Trump warned that a "major conflict” with North Korea was "absolutely” possible in the ongoing standoff over its nuclear and missile programs.
Chinese Foreign Minister Wang Yi, however, pushed back, arguing at the ministerial meeting that it was unrealistic to expect just one country to settle the conflict.
"It is necessary to put aside the debate over who should take the first step and stop arguing who is right and who is wrong," Wang said, adding, "Now is the time to seriously consider resuming talks."
Beijing advocates the policy of negotiations first and action later, while Washington seeks to force Pyongyang to curtail its nuclear program before such talks begin.
Russia, for its part, expressed its strong opposition to resorting to military options to resolve the conflict in the Korean Peninsula, saying such measures were "completely unacceptable” and would have "catastrophic consequences.”
Russian Deputy Foreign Minister Gennady Gatilov further told the council that China's proposals to renew negotiations with Pyongyang should be seriously examined, adding that sanctions alone would lead to nowhere.
North Korea, already under a raft of sanctions for its missile and nuclear programs, says it is developing arms as deterrence against the US. It says it will not abandon its missile and nuclear programs unless the US ends its hostility toward Pyongyang.
The North, which has so far conducted five confirmed nuclear tests and numerous missile test-launches, is believed to be preparing for a sixth nuclear weapons test. While Pyongyang has not fired missiles against other countries, it has vowed strong action -- including missile attacks against South Korea -- if it is invaded by the South and the US.
Tensions are rising in the Korean Peninsula between Pyongyang and Washington, and the two sides have been issuing increasingly gruff threats against one another in recent weeks.
Source:Press TV
Share to
Related News
N Korea threatens to turn US submarine into ‘underwater ghost’
North Korea 'poses a grave threat' to US, allies: McMaster
‘Things can slip out of control,’ China says of North Korea tensions
Afghan Taliban declare start of ‘spring offensive’
Ankara says military had informed Washington, Moscow of air raid
Tags
north korea ، missile ، US
Your Comment