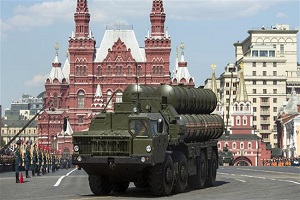 TEHRAN, Young Journalists Club (YJC) - "We agreed in principle with Russia on S-400 purchases. The negotiations on joint production and prices are underway,” Cavusoglu told the Haberturk newspaper on Friday.
Turkey will purchase the missile system in a bid to "to strengthen its air defense capabilities,” he said.
Referring to Ankara’s potential option to buy air defense systems from the North Atlantic Treaty Organization (NATO), of which Turkey is a member, Cavusoglu stressed that his country "would like to buy them from NATO, but they have not demonstrated movement in this direction.”
Earlier this week, Turkish Defense Minister Fikri Isik said that Turkish President Recep Tayyip Erdogan and his Russian counterpart, Vladimir Putin, would discuss the S-400 deal during a meeting in the Black Sea resort city of Sochi on May 3.
Kremlin spokesman Dmitry Peskov confirmed that the S-400 agreement would possibly be on the agenda of the talks between the two officials.
Turkey and Russia entered into discussions on the purchase of the S-400 system last November.
Russia’s S-400 air missile defense system is capable of engaging 36 targets simultaneously and shooting down aircraft at a range of 400 kilometers and ballistic missiles at a range of 60 kilometers.
In June 2016, Turkey and Russia put an end to seven months of strained relations when Erdogan wrote a letter to Putin, apologizing for the Turkish military’s downing of a Russian Sukhoi Su-24 that had been on an anti-terror mission in Syrian skies near the Turkish border.
Source:Press TV
Share to
Related News
Russia raps Montenegrin MPs for bypassing referendum to ratify NATO bid
Erdogan actions ‘severely hit’ EU-Turkey ties: Merkel
Watchdog sounds alarm over media freedom worldwide
Turkey nabs 1,000+ over failed coup
Tags
turkey ، principle ، russia
Your Comment