Iran exports to Europe up by 300% after JCPOA: EU

TEHRAN, April 29, YJC - Iran’s exports to the European Union have increased by 300 percent after the implementation of the historic 2015 nuclear agreement between Iran and the P5+1 group of countries, European Climate Action and Energy Commissioner Miguel Arias Canete said. 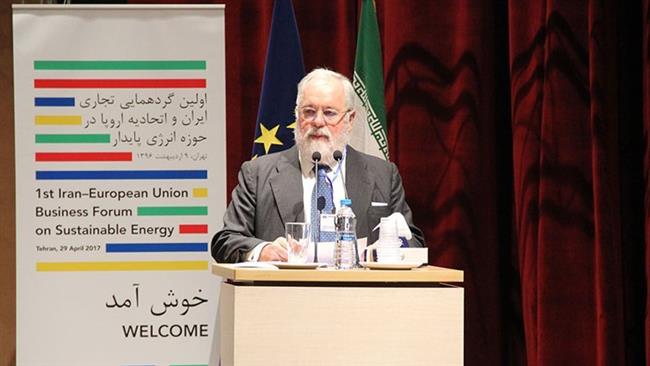 TEHRAN, Young Journalists Club (YJC) - Speaking at the first-ever Iran-EU Business Forum on Sustainable Energy in Tehran on Saturday, Canete added that trade between Iran and the union showed 79 percent boost following the implementation of the nuclear deal, known as the Joint Comprehensive Plan of Action (JCPOA), IRNA reported.
He expressed the 28-nation bloc’s keenness to cooperate with Iran in the nuclear energy sector and said the JCPOA prepared the ground for the resumption of Iran-EU cooperation.
The commissioner reiterated the EU’s support for the nuclear agreement and said Iran and the union started to cooperate with each other in different sectors in 2016 and managed to sign many agreements.
He urged both sides to continue to upgrade their cooperation and expressed hope that the ongoing forum in Tehran would lay the ground for interaction in clean energy.
Canete expressed the readiness of the European countries to transfer their experience in the development of clean energy to Iran so that Tehran would be able to meet 30 percent of its energy needs from renewable energy resources by 2030.
He noted that he would help European firms make more investment in Iran.
Iran and the five permanent members of the United Nations Security Council - the United States, Britain, France, China and Russia - plus Germany signed the JCPOA on July 14, 2015 and started implementing it on January 16, 2016.
Under the agreement, limits were put on Iran’s nuclear activities in exchange for, among other things, the removal of all nuclear-related bans against the Islamic Republic.
Following the conclusion and implementation of the JCPOA, Iran and EU member states launched cooperation and signed several agreements in various fields.
More than 50 European companies and business associations and some 40 Iranian energy companies are participating at the Tehran forum with the purpose of enabling business relations and partnerships between Iran and the EU and laying the ground for further cooperation and joint partnerships in the energy sector.
It will provide a platform for investors and businesses to look into investment opportunities for clean energy, renewable energy efficiency and energy conservation actions in Iran.