Mass protest decries start of U.S. base work off Okinawa

TEHRAN, April 30, YJC - Thousands of protesters opposing the relocation of a U.S. military base rallied in Okinawa. 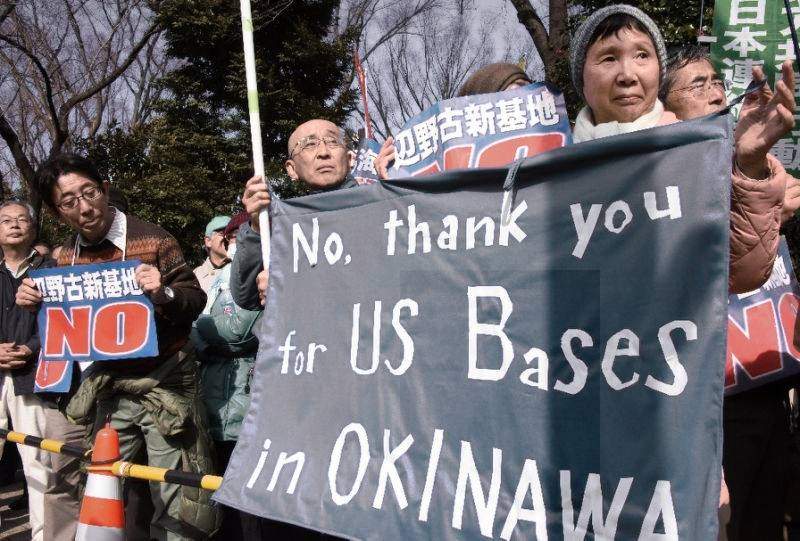 TEHRAN, Young Journalists Club (YJC) - NAGO, Okinawa Prefecture--Thousands of protesters opposing the relocation of a U.S. military base here rallied on April 29 in their first mass demonstration after the government began offshore land reclamation work earlier in the week.
An estimated 3,000 demonstrators chanted their opposition in front of a gate of the U.S. military's Camp Schwab, near where the base project is under way to transfer the functions of U.S. Marine Corps Air Station Futenma in Ginowan, also in the prefecture.
The demonstration comes after the government started reclamation work off the Henoko district of Nago on April 25.
At the beginning of the protest, participants observed a silent prayer to mark the first anniversary of the slaying of a 20-year-old local woman, who went missing April 28, 2016, before her body was found on May 19, 2016. A former U.S. military service member who lives in Okinawa and was working at one of the bases is awaiting trial on a murder charge in connection with her death.
Nago Mayor Susumu Inamine, who attended the rally, renewed his vow to the protesters to have the base project scrapped.
"Everyone believes the woman fell victim to the murder because there are many U.S. military bases in Okinawa,” he said. "We should fight until the base project is withdrawn.”
The rally was also designed to coincide with the anniversary of the San Francisco Peace Treaty’s coming into force on April 28, 1952, the day that is known as the "day of disgrace” in the southernmost prefecture.
With the treaty, Japan regained its sovereignty, while Okinawa came under U.S. military rule.
Source: The Asahi Shimbun
Share to
Related News
Anti-U.S. base mayor seeks re-election in Okinawa's Nago city
Hundreds protest US military flights over Okinawa schools after 2 dangerous incidents
Environmental protesters swarm outside White House as Trump hits milestone
London students protest Israeli envoy’s planned speech
Tags
protests ، nago mayor ، susumu inamine ، san francisco ، okinawa ، us military ، henoko
Your Comment