TEHRAN, April 30, YJC - Leader of the Islamic Revolution Ayatollah Seyyed Ali Khamenei says Iranian people have removed the specter of war, dismissing claims that it was the achievement of a certain administration. 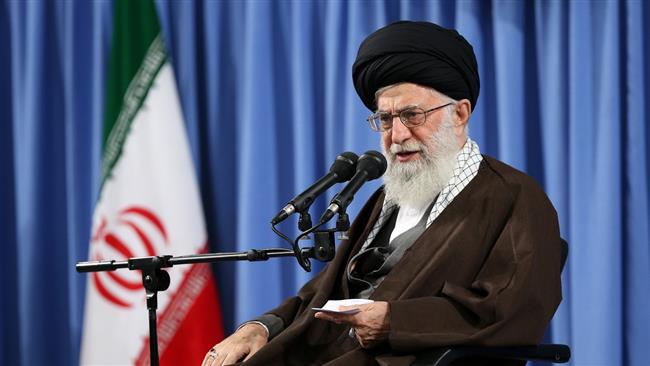 TEHRAN, Young Journalists Club (YJC) - "Sometimes we hear and have heard in the past that certain individuals say, ‘when we came along and assumed responsibility, we managed to take away the shadow of war over the country,’” the Leader told a group of workers in Tehran Sunday.
"No. These statements are not right. It is the presence of the people that has removed the shadow of war, and not the authorities,” Ayatollah Khamenei said.
"When you see that the impertinent and bull-necked enemies are refraining from taking any harsh action against the Islamic Republic, it is because of the presence of the people. They fear the people. They are literally afraid,” the Leader added.
Ayatollah Khamenei's remarks came ahead of the presidential election in Iran on May 19 which is expected to be a close race.
The Leader said, "The beloved Iranian people should know that their presence in various arenas is determining. It is determining for national security; if the people come to the scene, the country will remain secure."
"When the people are present at the scene, the enemy which seeks to confront the establishment has to beat a retreat and forgo an encroachment," Ayatollah Khamenei said.
"When a gap is created between the nation and the establishment and the nation is not present at the scene, they (the enemies) can do whatever they want," the Leader added.
Ayatollah Khamenei further advised candidates in the upcoming presidential election to consider lofty objectives in their campaigns.
"You should lend divine character to your intentions. They should not be for power; they should be for the service (to the people). Enter the battleground to serve the people, especially the weak classes.”
"Everyone should know that we cannot make this country prosper unless we invest in Jihadi and revolutionary endeavors,” the Leader added.
Some 55 million people are eligible to vote in the presidential election which is contested by six candidates, including incumbent Hassan Rouhani.
In his remarks, Ayatollah Khamenei called on the Iranians to go to the polls and cast their ballots.
"I never say whom you should elect. But I call on you to turn out at the ballot boxes and vote. Everybody who loves this country and its security, should show up at the ballot boxes."