TEHRAN, April 30, YJC - Iranian President Hassan Rouhani and a contender in the forthcoming presidential election has filed a complaint with Iran’s Election Campaign Monitoring Committee about allegations leveled by another candidate against him during a live TV debate. 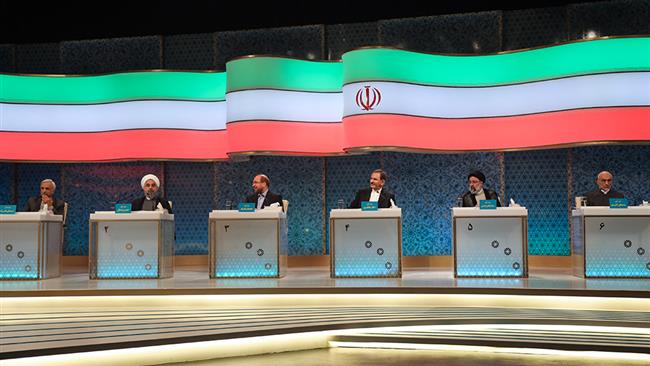 TEHRAN, Young Journalists Club (YJC) - The cultural advisor to the Iranian president, Hesamoddin Ashna, said on Sunday that the complaint was lodged after presidential candidate, Mohammad Baqer Qalibaf, leveled three different accusations against Rouhani.
He added that Rouhani complained to the committee that he was not given enough time to respond to Qalibaf’s accusations.
Ashna expressed hope that the committee would investigate the complaint.
During the first live debate among the six presidential candidates on Friday, Qalibaf claimed that Rouhani had failed to fulfill his promises to solve economic issues in the country during his first 100 days in office and create four million jobs.
The Tehran mayor also claimed that an Iranian billionaire, who is currently in prison for fraud and money laundering among other charges, had helped Rouhani during his presidential campaign four years ago.
Rouhani denied all the accusations in the debate.
Qalibaf: Rouhani was given 2 more minutes to talk
Meanwhile, a political advisor to Qalibaf told ISNA on Sunday that the current mayor of Tehran had also filed a complaint with Iran’s Election Campaign Monitoring Committee.
"One of the issues of the complaint was that Rouhani was given two minutes more [than other candidates] to speak,” Hossein Qorbanzadeh said.
He also cast doubt on the impartiality of the moderator, Morteza Heidari, during the Friday presidential debate.
Qorbanzadeh said at the end of the legal time given to each candidate, the moderator cautioned them and stopped them from making extra comments, but he waited for President Rouhani to end his remarks.
There are also speculations about the role of the moderator in Rouhani's campaign meetings, he added, saying, "Therefore, we believe that the moderator of the debate must change.”
He further noted that the committee did not give time to Qalibaf to respond to accusations leveled by Rouhani and another presidential candidate and the current first vice president, Es’haq Jahangiri.
Raeisi protests at procedure in 1st live debate
Another presidential hopeful, Seyyed Ebrahim Raeisi, also on Sunday filed a written complaint with the election monitoring committee.
Raeisi had complained about the procedure of the first live debate.
Aqa-Mirsalim protest at live debate procedure
Head of the election office of Mostafa Aqa-Mirsalim, another presidential candidate, said a letter had been sent to the polls monitoring committee in protest at the way various issues were raised in the debate, which had nothing to do with the main subject of the debate.
Mohammad Ali Amani added that Aqa-Mirsalim had spoken on issues assigned to him within the framework of the debate’s topics, but other candidates did not observe that framework
He added that Aqa-Mirsalim's election office had asked Iran’s Election Campaign Monitoring Committee to determine the format of the next debate.
The first debate among the six candidates in the 12th Iranian presidential election was aired live on state television.
The live broadcast, which lasted for three hours, aimed to reduce the candidates’ campaign spending and pave the way for eligible voters to make their choice based on the sharp-cut and unambiguous plans represented during the program.
The six candidates running for the presidential election are Mostafa Aqa-Mirsalim, Mostafa Hashemi-Taba, Es’haq Jahangiri, Hassan Rouhani, Mohammad Baqer Qalibaf and Seyyed Ebrahim Raeisi.
Iranians will go to the polls on May 19 to elect the country’s next president.