FBI backtracks on Comey's testimony to Senate on Clinton

TEHRAN, May 9, YJC - FBI sources have revealed that the bureau's Director James Comey had given an inaccurate report during a Senate testimony last week regarding Hillary Clinton’s compromising emails. 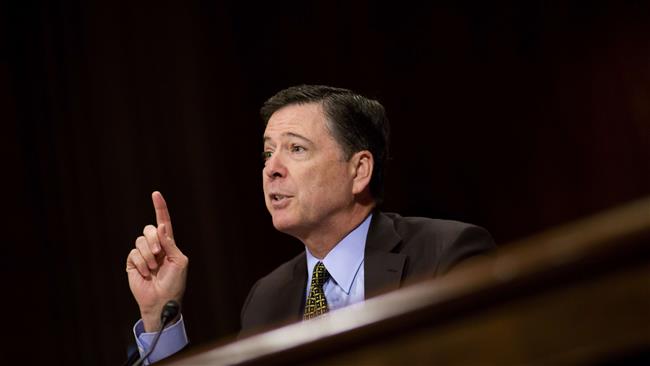 TEHRAN, Young Journalists Club (YJC) - ProPublica newsroom reported on Tuesday that FBI officials have privately acknowledged Comey’s statements were not accurate and were preparing to correct the record by sending a letter to Congress later this week.
Last week, Comey testified to the Senate Judiciary Committee explaining what he described as an "incredibly painful” decision to go public about the Clinton emails found on Anthony Weiner’s laptop.
Weiner was the husband of Huma Abedin, a top aide to Clinton, in the past.
Comey told the Senate that Abedin had regularly passed classified letters to Weiner for him to print out, thus, compromising state security.
However, investigators found Abedin forwarded only a handful of emails to Weiner to print, and she did not make a "regular practice” of doing so.
FBI officials have internally acknowledged that Comey inaccurately stated the number of Hillary Clinton’s emails her longtime aide Abedin forwarded to her then husband Weiner’s laptop during Senate testimony last week, according to ProPublica, adding that, FBI officials were now looking for a way to correct the Congress record.
Weiner, who is former congressman, had his laptop seized by the FBI as part of an investigation into a matter unrelated to the Clinton's emails.
Weiner came under FBI investigation following a media report about his online relationship with a teenager.
The discovery of the Clinton's emails on Weiner’s laptop led Comey to send a letter to Congress,eleven days before the presidential election, notifying Congress the FBI is reopening the case due to compromising emails found on Weiner's laptop.
The letter knocked the Clinton presidential campaign sideways.
Clinton’s team blame Comey’s decision to release the documents ahead of the presidential voting as the reason for the Democrat’s unexpected loss to President Donald Trump.

In July, Comey announced FBI’s investigation regarding Clinton's mishandling of her emails during her tenure as United States Secretary of State, showed that she had been "extremely careless"; however, Comey recommended that no charges be filed against her, Presstv reported.
Comey, also announced that the FBI's second probe had found nothing to incriminate anyone implicated in the case.