TEHRAN, May 24, YJC - A so-called monitoring group says more than a dozen civilians have lost their lives when the US-led coalition purportedly fighting the Daesh Takfiri terrorist group carried out a string of aerial attacks against an area in Syria’s militant-held northern province of Raqqah. 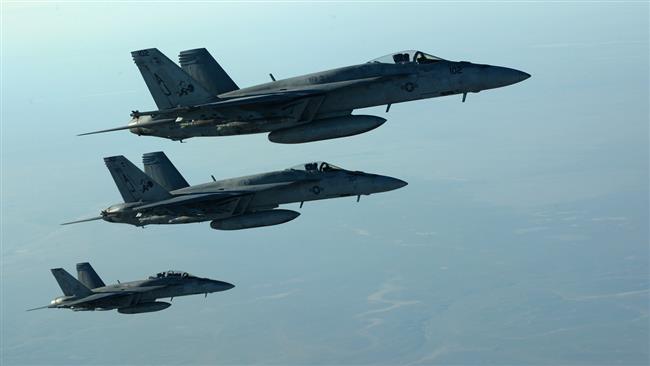 TEHRAN, Young Journalists Club (YJC) - The Syrian Observatory for Human Rights said (SOHR) said on Wednesday that the airstrikes targeted the village of al-Baruda, located about 15 kilometers west of the provincial capital city of Raqqah, leaving at least 16 civilians dead.
The Britain-based monitoring group added that five young siblings were among those killed in the aerial raids.
On May 15, a US-led airstrike targeted the city of Abu Kamal in Syria’s eastern province of Dayr al-Zawr near the border with Iraq. Nearly two dozen civilians lost their lives as a result of the attack.
The SOHR noted that some of those killed in the strike were civilians displaced from both Raqqah province and neighboring Iraq.
The development came less than two days after a US-led aerial attack in Raqqah killed 12 women.
The observatory said the strike had hit vehicles carrying farm workers home from fields in the east of the embattled Syrian province.
The US-led coalition has been conducting airstrikes against what are said to be Daesh targets inside Syria since September 2014 without any authorization from the Damascus government or a UN mandate.
The city of Raqqah, which lies on the northern bank of the Euphrates River, was overrun by Daesh terrorists in March 2013, and was proclaimed the center for most of the Takfiris’ administrative and control tasks the next year.
The US-led coalition has repeatedly been accused of targeting and killing civilians. It has also been largely incapable of fulfilling its declared aim of destroying Daesh.
Syrian army forces kill Daesh minister of war
Meanwhile, Syrian government forces have killed the "war minister” of the Takfiri Daesh terrorist group during counter-terrorism operations in the embattled northwestern province of Aleppo.
A military source, speaking on condition of anonymity, told Syria’s official news agency, SANA, on Wednesday that Abu Musab al-Masri was among 13 high-ranking militant commanders slain on the eastern outskirts of Aleppo, located some 355 kilometers north of the capital Damascus.
The source identified Saudi and Iraqi nationals, namely Abu Abdullah Mohammed Sameih al-Kisri, Ali Nazal Qarah Bash and Sufian Mohammed Abboush, among the dead.
The Pentagon claimed last year that the previous Daesh minister of war, identified as Abu Omar al-Shishani, had been killed in a US-led strike in Syria.
The Daesh militant group later confirmed Shishani’s death but said he had died in fighting in the Iraqi city of Sharqat, located some 300 kilometers (190 miles) north of the capital Baghdad, Presstv reported.
Syrian military forces and their allies also restored security and stability to a number of villages and towns, including al-Mahdoum, al-Bailouneh, Jirah Sagheir, Tel Hassan, Umm Nesourah, Wajab Ali, Bani Zeid, Kherbet Hassan and al-Khaldieh, in the eastern countryside of Aleppo.
The recent military operations reportedly in the death and injury of over 3,000 Daesh terrorists, and destroyed 19 battle tanks, five amphibious infantry fighting vehicles, 11 car bombs, six artillery shells, nine arms depots, two communication centers, and 61 field command centers.
Syria has been fighting different foreign-sponsored militant groups since March 2011.
UN Special Envoy for Syria Staffan de Mistura estimated last August that more than 400,000 people had been killed in the crisis until then.