TEHRAN, May 25, YJC -Bahraini protesters have defied Manama’s warning against holding more public gatherings and stayed on the streets in a show of anger against the regime’s bloody crackdown on Diraz, the home village of prominent Shia cleric Sheikh Isa Qassim. 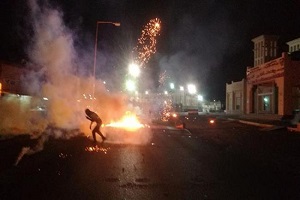 TEHRAN, Young Journalists Club (YJC) -Several videos, released late Wednesday, show hundreds of Bahraini protesters, including women and children, holding peaceful protests against the ruling Al Khalifa regime.
Other footage shows protests turn violent after regime forces fired tear gas at the demonstrators.
The escalation comes despite a Wednesday statement by the Bahraini Interior Ministry, which warned against "any gathering or incitement” to protest.
The ministry issued the warning a day after police stormed into the home of Sheikh Qassim, prompting clashes with the cleric’s supporters. During the raid, regime forces shot dead at least six demonstrators, wounded dozens and arrested over 280 people.
The fresh wave of ant-regime protests began on May 21, when a Bahraini court convicted Sheikh Qassim of illegal collection of funds and money laundering and sentenced him to one year in jail and ordered him to pay $265,266 in fines.
The cleric had been under house arrest for several months, but his fate has been unclear since Bahraini forces raided his house on Tuesday and arrested everyone there.
According to the Beirut-based al-Mayadeen TV channel, the Bahraini regime was planning to force Sheikh Qassim into exile in Iraq, but Iraqi Prime Minister Haider al-Abadi rejected Manama’s request in a show of support for the Shia leader.
Human rights groups have condemned Bahrain for its deadly crackdown on people in Diraz that took place right after US President Donald Trump left Saudi Arabia, where he met Bahraini King Hamad bin Isa Al Khalifah.
Riyadh, whose forces have been helping the Bahraini military in suppressing anti-regime protests over the past years, came to Manama’s defense on Wednesday, saying the Bahraini kingdom is "an integral part” of Saudi Arabia’s security.
Amnesty International has called for an independent probe into Manama’s use of "excessive force” against "peaceful” protesters in Diraz, stressing that the village has been under siege for over 11 months.
‘Trump must speak out’
New York-based Human Rights First has also urged Trump’s administration to condemn the Bahraini military for the "deadly disturbing” raid on Diraz.
"It is especially alarming that the raid comes just two days after President Trump met the king of Bahrain and assured him that there would no longer be any strain on the US-Bahrain relationship,” said Human Rights First Director Brian Dooley.
"President Trump should immediately speak out against these attacks and make clear that the repression of peaceful civil society will damage the bilateral relationship with Bahrain,” he added.
In a Sunday meeting with the Bahraini monarch in Saudi Arabia, Trump said Washington and Manama "are going to have a very, very long-term relationship.”
Dooley further said, "These latest attacks on peaceful protesters show that the Bahraini regime took Trump’s words Sunday as a signal to intensify its repression without fear of censure.”
Thousands of anti-regime protesters have held numerous demonstrations in Bahrain on an almost daily basis ever since a popular uprising began in the kingdom in early February 2011.
They are demanding that the Al Khalifah dynasty relinquish power and a just system representing all Bahrainis be established.
The Manama regime has spared no effort to clamp down on dissent and rights activists.
Scores of people have been killed and hundreds of others have been injured or arrested as a result of the Al Khalifah regime’s crackdown on anti-regime activists.
Source:Press TV
تعداد بازدید : 339
Code
Download
Main Quality
Share to
Related News
Iranian official urges UN to end human rights breach in Bahrain
Certain states boosting Takfiri firepower: Iran’s Shamkhani
Massive army drill underway in Iran
Iran-Afghanistan talks on security issues in Moscow
Tags
iraq ، bahrain ، manama
Your Comment